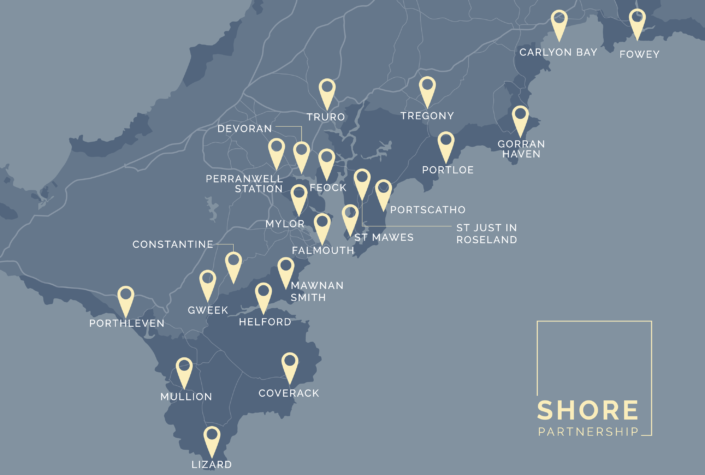 Falmouth, a buzzing, energetic, creative and historic port with an eclectic mix of leading-edge companies and boutiques, has been voted one of the best places to live in the southwest and is situated at the entrance to the Carrick Roads, a beautiful estuary bordered by countryside and villages such as Mylor, Perranwell Station, Devoran and Feock.

Truro, the capital of Cornwall, is defined by its superb cathedral, quality state and public schooling, award winning college, sports clubs and music scene. The Helford enjoys a timeless and unspoilt atmosphere hosting some of Cornwall’s most beautiful gardens. Extending from Gweek to Falmouth Bay, its valleys, forests and creeks are home to many highly desirable villages including Mawnan Smith, Constantine, Port Navas and Gweek.

The Roseland peninsula is characterised by rolling fields, unspoilt landscape (it was one of the only areas in Cornwall not to be mined), extensive coastline and emerging culinary scene. The area is rich in desirable places to live and explore including Portscatho, Portloe, St Mawes, St Just-In-Roseland and Tregony.

Carlyon Bay and Gorran Haven are emerging as prime areas along the coast and the historic community of Fowey is an immensely characterful town that hosts an annual literature and arts festival. Fowey’s many quality restaurants, sailing scene, ferry links to pretty Polruan and the river leading up to Cornwall’s best kept secret, Lostwithiel, with its antiques scene and bohemian atmosphere all combine to form one of Cornwall’s most sought-after locations.

The Lizard Peninsula forms the southernmost part of mainland Britain and is home to some of the county’s quieter and most idyllic locations characterized by towering cliffs, beautiful beaches, fishing villages and diving.  The peninsula is a coastal and rural collection of communities with some of the county’s most stunning beaches (Kynance Cove, Housel Bay, Gunwalloe, Polurrian and Poldhu) complemented by many charming villages including Coverack, Cadgwith, Mullion, Mawgan, Manaccan and Porthleven. We like to think of the Lizard as being a Cornwall within Cornwall.